Photo gallery: Fitting those workouts into your life

Gathering a load of groceries, Laurie Steelsmith barely looks up at the 40 steep stairs that lead to her St. Louis Heights home. Up she goes, not even breaking a sweat. The dog wags at the top, waiting to be walked, and an array of exercise machines gleam through the windows of an airy tree-shaded porch.

“You have a job, children, dinner to make, homework to monitor, you don’t have time to go to the gym,” says Steelsmith, a doctor of naturopathic medicine who lives the same hectic life as many of Hawai’i’s professional women. 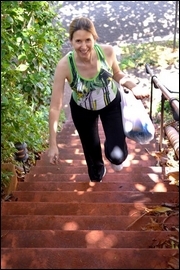 That’s how her basic fitness formula emerged: simply ramping up the daily routine a little by things like taking the dog for a peppier walk, going up and down stairs several more times a day, putting in 15 to 30 minutes each morning on home exercise machines, and taking a morning off every week for a yoga class.

“Get up half an hour earlier – you can still be in your pajamas – and do a workout,” she says. “Roll out of bed, walk the dog and then do half an hour on the stationary bike. Sometimes I only have 15 minutes, but I still do it. I have a rule: I have to sweat before I shower.”

“This is your foundation,” she says. “Nothing will work for anybody unless you have this foundation.”

A former childhood gymnast, Steelsmith has always exercised, but she hasn’t always made sure she does it every day.

By 40, her medical practice was running her life, and so were her efforts to write a book about how women could make choices for their health. She wasn’t taking the same time for herself that she was advocating to patients.

“I was trying to be this business person, and it wasn’t working for me,” she said. “I think I thought I was in finals all the time. It was overwhelming and stressful, and I wasn’t happy. I kept getting sick a lot, writing a book about creating great health for people. It became very clear – I needed to make a big change.”

So Steelsmith changed her schedule, and the number of patients she sees. And she made exercise a priority.

“I wanted to be the woman I was writing about,” she says. “The woman who was taking care of herself. And it really hit me. This isn’t finals, it’s real life. And life is to be lived, not to be gotten through.”

With that change of priority came a happier, healthier life, one that leaves her time for herself, for her medical practice, and for her home and husband.

“I became super disciplined about every morning really giving that exercise to my body,” she says. “I got a stationary bike, an elliptical trainer and a mini Pilates machine. And I now go to a Pilates class and yoga.

“I think it’s making up your mind about what you want. I’m 43 years old, and I can still do cartwheels, handstands and backbends. And I’ve kind of told myself I’m going to keep that, always.”

Steelsmith and her husband, artist Alex Steelsmith, pull the mini Pilates machine out into the middle of the living room, and she positions herself on her back, with feet snugly in the foot rests, lifting her legs in unison and feeling the tug in her abdominal muscles. Her stomach is flat under her yoga pants, and this is how she keeps it that way.

These exercises strengthen the body core, she says.

“This stabilizes your whole body. The core is where you want to be moving from. We want to strengthen that, because it will prevent lower back problems.”

The exercises also strengthen the pelvic floor – a protection against incontinence as one ages.

Steelsmith raises her legs 20 times in succession and then jumps up and moves to the elliptical trainer positioned in front of a set of shelves with a TV and a brace of movies and inspirational videos. Pop one of those into the TV, she says, and an hour of exercise passes before you know it.

“You stay longer because you’re waiting to know what happened.”

Steelsmith likes to vary her routine using a different machine each morning.

She may also spend five or 10 minutes with stretchy bands. They’re simple: Tie one around your thighs or knees and hold the other in your hands. Then stretch the one in your hands back and forth with your elbows tucked next to your body as you step sidewise from foot to foot working your thighs.

“I talk to so many patients about doing exercise at home, and they buy elliptical trainers or stationary bikes,” she says. But just carrying groceries up the front stairs also strengthens and tightens the arms, back and glutes.

Steelsmith grew up on the East Coast, taking gymnastics, and was a competitive diver in her youth. But she also hikes and climbs mountains, sometimes with a 60-pound pack on her back.

At 38, she took the gold medal for diving at the Aloha Games, bringing back 10 of her competitive dives in just a few weeks of work. But she says as she has gotten older and busier, she needs to work at making exercise a regular part of her routine.

After a workout she’ll treat herself to what could be one of the world’s healthiest smoothies – a purple mixture that leaves your teeth blue and tastes great. It includes fresh apple, banana, carrot, blueberries, parsley, water, a rice-based protein powder and powdered “nanogreens” which are high in antioxidants and micronutrients.

On top of that, she tries to always keep an inner vision of the healthy woman she wants to be.

“A few days ago I had a patient say to me, ‘Well, how do I stop drinking?’ She just enjoys that wine. So I said, ‘I want you to have that vision of the person you want to be and your healthiest self. Let’s draw a picture of her and give her the characteristics that you want her to be, and let’s go for her.’ “