CAROL LIN: We thought we’d pick a pretty timely topic for our “Health Watch” segment – the flu season. You know, for a lot of people that means getting a shot or even taking some medicine. But Imagethere are other ways to stay healthy. Dr. Laurie Steelsmith is the author of “Natural Choices for Women’s Health.” (Cover of the book appears on screen.) She’s here now to tell us how to fight colds and flu the natural way. Good to have you. 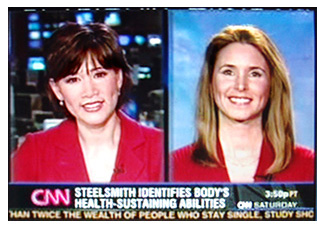 LIN: Alright, the natural way. You know, I’m afraid I’m the first person to reach into my medicine cabinet for, you know, something in a dark bottle that I bought at the drugstore. But what are you suggesting people can do to, let’s say, ward off flus and colds?

STEELSMITH: One of the best things they can do to ward off a flu and cold is to help harness cortisol. It’s our stress hormone, and when we’re under too much stress we suppress our immunity, so it’s really important that we decrease that cortisol. And we can do that through a variety of ways, one of which is to make sure that we eat regular meals – lots of protein, complex carbohydrates. Make sure we keep that sugar as low as possible because sugar is definitely an Imageimmune suppressant. We also want to make sure that we exercise regularly. That also helps to bring down our cortisol levels. 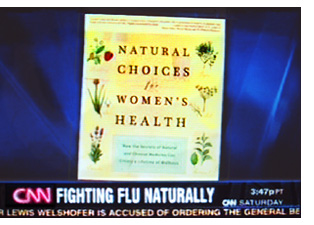 LIN: Alright, but are there things – other things – that we can do? And then also, once – eventually we’re going to get sick, right? What are the things that we should do then?

STEELSMITH: Well, there are a number of things we can do if we get sick. You know, one of the recommendations I give to my patients, and something that I’ve also used myself, is an ancient Chinese mushroom. It’s called Reishi mushrooms, and it was called the mushroom of immortality in Ancient China. And what it does is it actually helps to increase our natural killer cells, and our natural killer cells are what help us to fight infection.

LIN: Alright, and fighting infection, I mean is it better than just treating some of the symptoms? Like again, going to the drugstore and getting a tablet or a liquid?

STEELSMITH: Without a doubt, prevention is the best cure. An ounce of prevention is worth more than a pound of cure, and we definitely want to do everything we can to try to prevent infection before it starts.

LIN: I don’t want to mention the product by name, but there are these tablets, these kind of fizzy tablets you can now buy at a lot of different drugstores. And the claim is that, you know, if you get on an airplane drink this liquid, and when you get off the airplane do it three times a day, and it will prevent colds or if you start feeling the symptoms. It’s made – when you look at the ingredients – it’s made of, you know, vitamins and some herbs. And you kind of – but people swear by the stuff.

LIN: So it’s just a (speaking simultaneously; words not clearly audible) trick to get you to…

STEELSMITH: (finishing her previous sentence) – you get on the plane.

LIN: I mean, and water in and of itself can ward off disease?

STEELSMITH: Well, what it does is it keeps your mucous membranes hydrated so that you’re less susceptible to a virus being able to take hold and multiply.

LIN: Alright, so it’s a schtick!

LIN: Dr. Steelsmith, we’ve all been educated today! Thank you very much.

STEELSMITH: Oh, thank you too.